One of the most obvious differences between metal amalgam and your tooth enamel is the appearance. Metal amalgam fillings stand out on your teeth, even when they’re initially placed. They start out a bright silver color, although they aren’t made mostly out of silver. Instead, they’re mostly mercury, which is also a silver color.

But metal amalgam can look even worse: they often oxidize and turn black, sometimes shortly after placement. 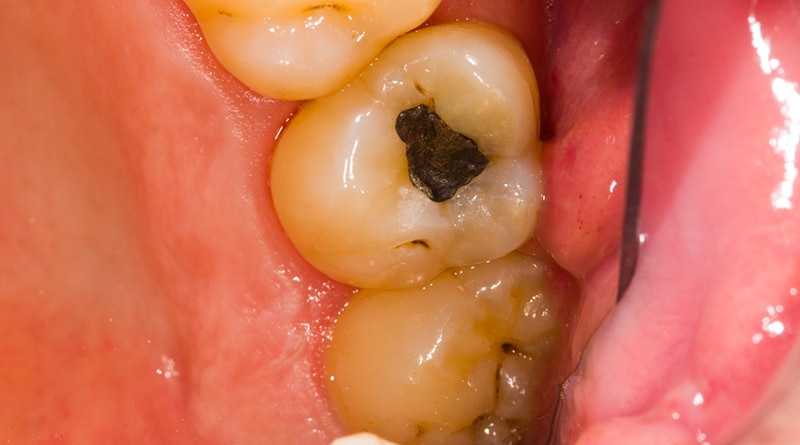 One of the advantages of tooth enamel is that it’s not a metal, so it doesn’t rust like metals. That’s what makes your metal fillings turn black: they are rusting. Rusting is just one of many types of chemical reactions that your fillings can have, and although other ones aren’t as visible, you can sometimes feel, taste, or even hear them!

Because metal amalgam fillings can create electric currents in your mouth, you might feel a tingle on your tongue or teeth when you use some metal silverware. You might also notice a metallic taste in your mouth. And some people even pick up radio messages on their fillings!

Your tooth enamel is chemically and physically stable, but metal amalgam isn’t. We’ve already talked about the tendency of the filling to react to chemicals. But because the mercury in amalgam fillings is a liquid, it can actually seep out of the filling into the porous matter in your teeth. This can contribute to discoloration of the entire tooth, not just the part where the fillings are.

Metal amalgam expands and contracts relatively quickly with temperature changes. This can cause tooth sensitivity or create a percolation effect.

Tooth enamel is a good insulator. It protects the interior of the tooth from temperature changes. Metal amalgam isn’t an insulator: it’s a conductor, and it will conduct heat into or out of the tooth, leading to tooth sensitivity.

And, of course, one of the biggest problems with metal amalgam is that it contains toxic mercury. Your tooth enamel, on the other hand, is made out of natural materials that are all safe for you.

Metal amalgam is a poor tooth restoration material because it’s so unlike your natural tooth enamel. If you want to get restorations that look and feel better–and are healthier for you, your teeth, and the environment–you should consider replacing metal amalgam fillings with more natural and more attractive ceramic fillings. These fillings are the most like your natural tooth enamel.

To learn more about replacing old fillings, please call (912) 234-8282 today for an appointment with a Savannah cosmetic dentist at Beyond Exceptional Dentistry.