Do you have metal fillings? If so, now is the time to get them replaced. Have any doubts? Let us help you understand why you should upgrade old metal amalgam fillings with new ceramic restorations. 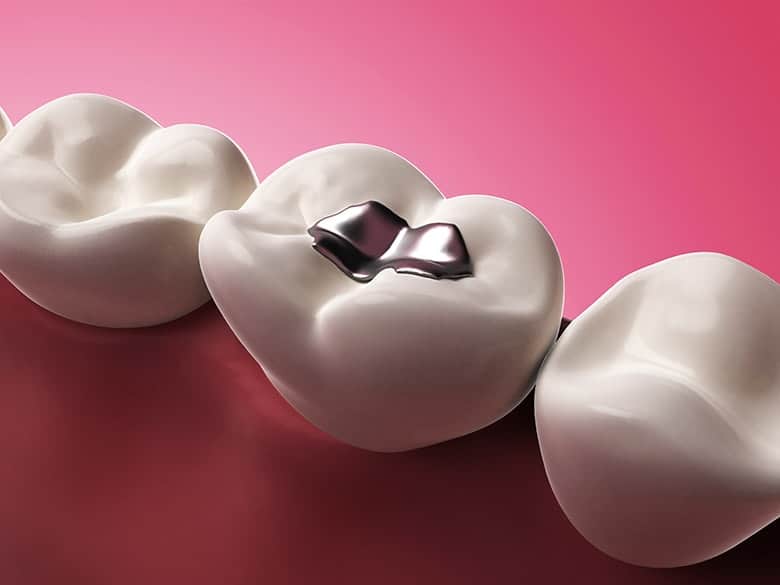 One of the most basic reasons to replace metal fillings is that they are very unattractive. These fillings are so obvious in your mouth, they scream out that you have had tooth decay. In some cases, they may even be mistaken for untreated tooth decay or debris on your teeth that hasn’t been cleaned up.

Metal amalgam starts out being silver in color, which is why they’re called “silver fillings,” although they aren’t primarily silver. Gold fillings are yellow, which makes them look like tooth stains at first glance. And even if they do get identified as fillings, the perception of unhealth remains.

Metal amalgam is even worse. It starts out silver, but it will usually turn black with time. That’s because the filling is not chemically inert and it “rusts,” which turns it black. This means that the filling itself can look like a huge, untreated cavity. Not only that, but it can discolor the entire tooth.

It’s also important to remember that these kinds of fillings could be marking your age. As the world has moved away from metal fillings, both amalgam and gold, it’s obvious that anyone with these older fillings must also be older themselves. Add this to the discoloring effect, and there’s no doubt that metal fillings make you look older.

Part of the reason why you got fillings, presumably, was to keep your teeth from hurting. If you have a cavity, it can make your teeth hurt, so, hopefully, your fillings will stop that and give you pain-free teeth. But that’s not always the case. All metal fillings can keep hurting for one reason, and metal amalgam fillings can cause even more pain.

If your toothache makes you sensitive to heat or cold it’s because the cavity (hole) in your tooth let’s the heat or cold penetrate deep enough to hurt the sensitive nerve inside your tooth. Metal fillings don’t help with this problem, because metal is a great conductor. It helps temperature changes penetrate as far into the tooth as the filling goes, just like the cavity did.

With metal amalgam, the problem is even worse. Metal amalgam expands much faster than tooth enamel or dentin, so when exposed to hot foods or liquids, the amalgam puts pressure on all sides of the filling, including the side where your sensitive tooth nerve might be very close to your fillings. That can make your teeth just as sensitive (or more) to temperature changes.

Just getting metal amalgam fillings unnecessarily damages your teeth. This type of filling requires a large space to be placed, so the cavity has to be drilled out more than for other types of fillings, removing healthy tooth material as well as damaged.

But that’s only the beginning for metal amalgam fillings. The temperature-related expansion and contraction of metal amalgam fillings can accelerate damage to your teeth. When the fillings expand due to heat, they put pressure on the natural tooth enamel. This causes tiny cracks to form that can propagate through the tooth and make it vulnerable to cracking when you’re biting or clenching teeth.

We should also not forget that the main component in silver fillings isn’t silver, it’s mercury. Mercury is one of the most highly toxic elements. It can cause severe neurological damage, leading to pain, paralysis, and even death.

It used to be believed that mercury stayed in the fillings, bound to other parts of the amalgam. But now we know that mercury escapes from fillings. It can evaporate from the fillings and be inhaled. It can also be worn while eating and be swallowed. It can even seep through the teeth and enter the bloodstream directly.

As a result of this, we know that people with metal amalgam fillings have higher levels of mercury in their blood and in their urine. And we know that this mercury concentrates the in the body over time.

What no-one disputes, though, is the environmental harms that come from mercury in the environment. The world has proposed phasing out metal amalgam completely due to its health harms and environmental dangers. The EPA is enacting tight new controls on dental offices to reduce the amount of metal amalgam that escapes from dentists’ offices. And people are seeking to control the pollution that comes from cremating bodies with silver fillings. (In places where cremation is popular, crematoria are the second largest source of mercury pollution in the air, which then causes mercury to rain down and pollute even isolated lakes and rivers.)

If you have metal amalgam fillings, you become a mobile source of mercury in the environment. Your breath and your urine spread mercury everywhere you go.

But the good news is that there are excellent options for replacing metal fillings, whether they’re amalgam or gold. The most popular option is composite fillings, which are made of a plastic resin that’s been embedded with ceramic microparticles for strength. These are inexpensive and quick to place. Although they’re vulnerable to staining, they’ve been shown to last as long as metal amalgam fillings.

An even better replacement is advanced ceramic fillings. These fillings are even more durable and more attractive than composite fillings. They’re stain resistant, wear resistant, and very strong. They make for the most attractive and longest-lasting fillings.

If you are considering replacing your old fillings, we can help ensure you get replacement fillings that fix all the problems with your metal fillings. Please call (912) 234-8282 today for an appointment with a cosmetic dentist at Beyond Exceptional Dentistry in Savannah, Georgia, USA.